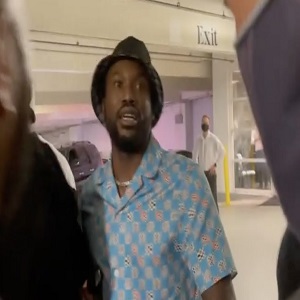 Through his career, Meek Mill was never a stranger to beef, starting out as a battle rapper. When he was rising to fame, Meek Mill actually had beef with Cassidy. Bigger and better, they ended their beef, moving on as grown men.

However, Meek Mill had the infamous battle with Drake, which added to his legacy. Though the people said Drake won, Meek still got a lot of attention from it. This morning, he’s receiving the kind of attention he’d rather avoid.

Meek Mill got into an altercation, with 6ix9ine, which went viral, this morning. Since it took place, every media outlet is giving their recap on what happened. Noticing this on Twitter, Meek Mill asked them to get it right, saying 6ix9ine waited outside the restaurant where he was eating, with cops, accusing Tekashi of setting him up.