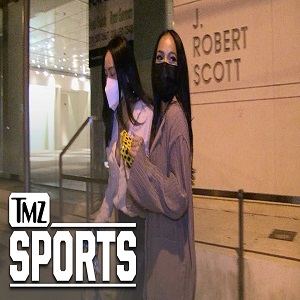 Last week, Karrueche Tran took over headlines, when news broke of her and Victor Cruz breaking up. After five years, together, Karrueche and Cruz decided to split. There is now a lot of speculation about the how and why of the situation.

Karrueche Tran is a popular actress, in the game. As she was rising to fame, she was dating Chris Brown. However, after the birth of his daughter, she broke up with him, revealing that the timing of Royalty’s birth meant he cheated.

Recently, Karrueche Tran was hanging out with some of her friends. It appeared to be some kind of “Girls’ Night Out,” but Kae was approached by TMZ reporters. When they asked her about the Victor Cruz breakup, Karrueche calmly avoided the question, and kept walking.

Lil Baby Trolls 42 Dugg After Dugg Fell Asleep in Tampa Nightclub [VIDEO]
Fight breaks out at Saucy Santana pre-Super Bowl party, last night, with nearly all of the women there, fighting, and most of the men trying to break it up [VIDEO]