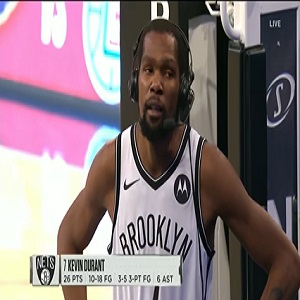 Injured since the 2019 NBA Finals, it’s easy to forget Kevin Durant, given all the changes the NBA went through, since the Toronto Raptors shocked the Golden State Warriors to win the title. Immediately following the series, KD signed with Brooklyn. He joined Kyrie Irving.

Kevin Durant began his career with the Oklahoma City Thunder, putting the new team on the map. Truly a team of the future, the Thunder had a core of KD, Russell Westbrook, and James Harden. After a Finals run, in 2012, the Thunder slowly tore the team apart.

Fast forward nearly nine years following the 2012 NBA Finals, a healing Kevin Durant now plays alongside Kyrie Irving, with the Brooklyn Nets. The team is in the news, heavily, but after their win over the Knicks, last night, Kevin Durant spoke with the media. He downplayed the team’s “drama” and dismissed the trade talks about James Harden, saying he’ll speak on it when the deal is finalized.