21 Savage continues to be one of the hottest artists in the game and that has been the case since summer 2016. His momentum hasn’t slowed down at all since his breakout “X” single featuring Future that year. His debut album in 2017, ‘Issa Album,’ debuted at No. 2 on the Billboard 200 chart and ‘I Am > I Was’ in 2018 reached No. 1. 21 also remains in high demand for features and his manager, Mega Meezy, is now addressing this.

Meezy took to his Twitter feed to discuss 21 features and explained that if someone doesn’t have at least $100,000 for it, then there’s no point of sending a DM.

“Dawg a 21 Savage feature is 6 FIGURES … y’all gotta stop wit da “check ya dm bra u playin” lol naw cause when u get hit wit da ticket u ain’t built for it.”

In October, 21 released another hot project as this time, it was the sequel to his 2016 breakout EP, ‘Savage Mode.’ This album had 15 tracks in total with appearances from Young Thug, Young Nudy, and Drake. It went on to debut at No. 1 on the Billboard 200 chart. It seems safe to say that the 6-figure feature price was expected. 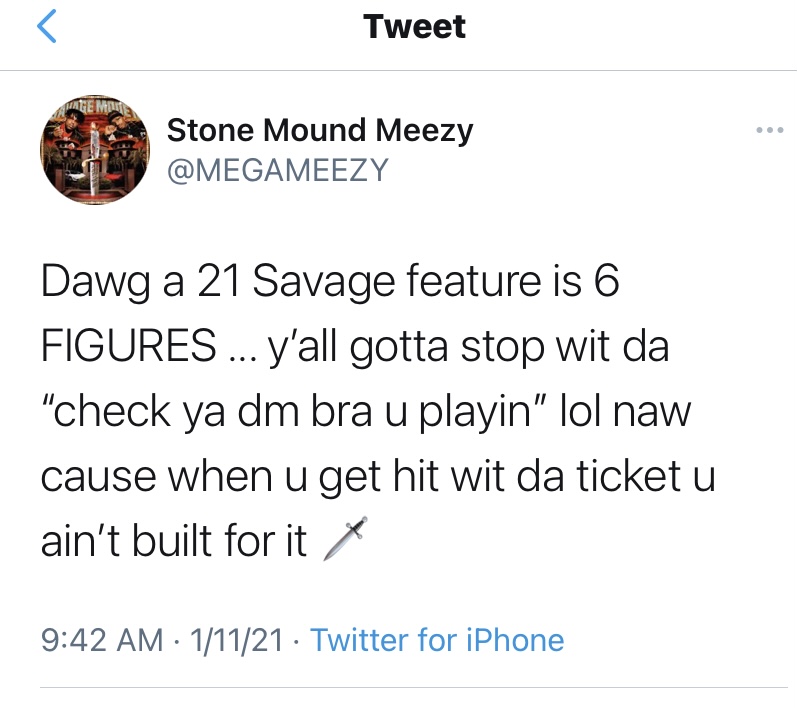 Continue Reading
You may also like...
Related Topics:21 savage

Azealia Banks shocks Twitter by digging up her dead cat and boiling it, in Instagram video, as fans accuse her of looking for attention, and then they come with jokes, including Doja Cat
YFN Lucci Reportedly Wanted in Atlanta on Multiple Charges in Murder of 28-Year-Old James Adams