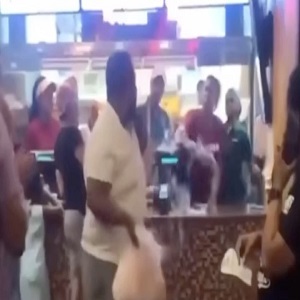 It seems there is always some kind of drama going down in a fast food restaurant. Normally, Popeye’s is where it’s all going down at, for whatever reason. Unfortunately, the customers don’t show the respect to the cashiers for the work that they do.

These times are among the most-trying in history and people need to be coming together. Instead, there are many people who are going against each other. The latest drama to take place has people going against one another.

A disgruntled man, in a Popeye’s, did the unthinkable, when he physically took his frustration out on a casher. He went off on the woman, which was bad enough, and then he threw his food at the woman. This led to an all-out brawl and an honest-to-goodness food fight taking place, right in the restaurant.

Keri Hilson gets brutally dragged by Twitter, over her defending Donald Trump, after his accounts were suspended, citing “Freedom of Speech,” with one fan saying they were right to end her career
Pop Smoke’s “What You Know Bout Love” Single From His Debut Studio Album, ‘Shoot For The Stars, Aim For The Moon,’ Hits Platinum Status