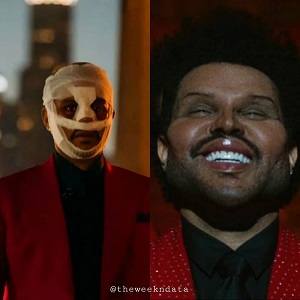 In a decade, The Weeknd has become a household name, separating himself from the other singers, in his category. It was “Wicked Games” that originally put him on the map, making him into the star he is currently known as. Since then, he’s dropped nothing but hits.

The Weeknd hasn’t put out much music, these past few years, but that has recently changed. This morning, The Weeknd dropped the “Save Your Tears” music video, to much fanfare. After seeing the video, fans were shocked.

Saying the absolute least, The Weeknd debuted a new look in the “Save Your Tears” music video. Underneath the bandages, it looks like The Weeknd had serious plastic surgery, which is likely a prop for the new music video. For the fans, that’s enough for them to begin roasting, which they have been doing, all day.

Read the tweets about The Weeknd below:

Continue Reading
You may also like...
Related Topics:jay rich, sae your, the weekn, wicked games