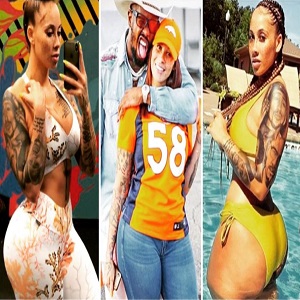 On the field, Von Miller is a beast, and he’s led the Denver Broncos to the highest of highs. In 2016, he led them to the Super Bowl championship, defeating the Carolina Panthers. For his efforts, Miller was awarded Super Bowl MVP.

The years following this saw much focus on his personal life. After becoming an established star, Von Miller fell in love. His leading lady was well-known Instagram personality, Megan Denise, and he described it to Tamron Hall as “love at first sight.”

Apparently, there is now no love lost, between Von Miller and Megan Denise. Last night, she leaked some disturbing text messages, which she claims are from Von Miller, questioning if “this y’all’s MVP?” These texts, which if they are from Miller, are disturbing, as she told him she was pregnant, and the text messages say they are praying for a miscarriage, later demanding an abortion.

Erica Banks is the latest rapper to take over TikTok, and IG Reels, with her “Buss It” single, as the #BussItChallenge is taking over the internet [VIDEOS]
NBA Youngboy Takes Snow Trip With New Girlfriend, Jazlyn Mychelle, While Yaya Mayweather is Still Pregnant By Him [VIDEO]