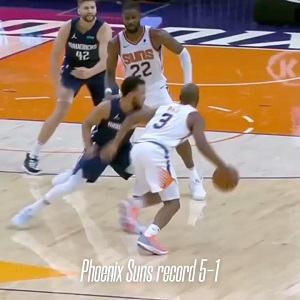 Words that haven’t been said, in a long time, are the Phoenix Suns have the best record in the NBA. Historically, the Suns were one of the all-time best NBA franchises. However, throughout the 2010s, the Suns were consistently one of the league’s worst teams.

After going to the 2010 Western Conference Finals, the Suns haven’t competed for a playoff spot, since. In fact, they have only had one winning season, since. But, in 2015, they drafted Devin Booker, and in 2017, he dropped 70 points on the Boston Celtics, in a blowout loss.

Last season, the Phoenix Suns were competitive, with Devin Booker leading them into the bubble, where they narrowly missed the playoffs. But, they managed to go 8-0, in the bubble, and then landed Chris Paul, during the offseason. Now, the Suns are off to a 5-1 start to the season, after beating Denver, holding the NBA’s best record, and have gone 13-1, since the bubble began.

Drake gets roasted over his new hairstyle and a meme compares his hair to NeNe Leakes, and the style she used to rock #RHOA [PHOTO]
Playboi Carti’s ‘Whole Lotta Red’ Album Officially Debuts at No. 1 on Billboard 200 Chart