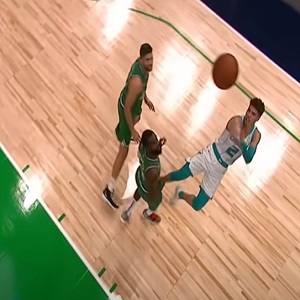 A few years ago, the Charlotte Hornets appeared to be a team on the rise, but the cap space hindered them. Going all-in on Nic Batum proved costly, ultimately costing them Kemba Walker. Last season, many expected the Hornets to be terrible, but they held their own.

Devonte Graham emerged as an unlikely leader for the team, which was still somewhat in the playoff hunt. Barely missing the bubble, finally the Hornets got a good draft position. With the third pick, LaMelo Ball was selected and early expectations are franchise player level.

LaMelo Ball performed well, two nights ago, in the Charlotte Hornets’ blowout win over the Dallas Mavericks. In the game, he dropped 22 points, on 70% shooting, grabbed 8 rebounds, and dished out 5 assists, definitely a breakout game for him. Now, some pundits are already floating LaMelo as the early Rookie of the Year favorite.

Vanilla Ice Angers Social Media After Performing at Donald Trump’s Mar-A-Lago and Not Wearing Mask Along With Others at The Party [VIDEO]
NBA Youngboy shooting, from May 2019, in Florida, is under federal investigation, which left a five-year-old boy shot, and a 43-year-old man killed