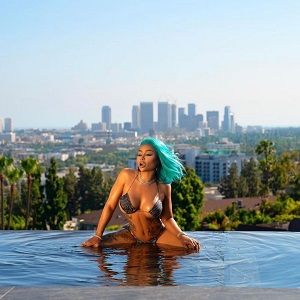 Consistently, Blac Chyna has risen to become a major force in the industry. Like many others, she started as a video vixen, and she got involved with Tyga, having a child with him. Instead of going the route of most ladies, VH1, Blac Chyna landed E!.

A weird love quad, involving siblings, led Blac Chyna to a relationship with Rob Kardashian, leading to an E! series, and a child. Their breakup was filled with scandal, which has left Chyna’s hashtag blocked on IG, three years later. It also made her fodder for TMZ and gossip blogs.

Blac Chyna is back in the news, today, with reports of her suing TMZ making news. Definitely, TMZ appears to cover every move that Chyna makes. Now, according to Gossip Of The City, Blac Chyna is suing the news outlet for an undisclosed amount, for defamation, conversion, public disclosure of private facts, and intentional infliction of emotional distress.