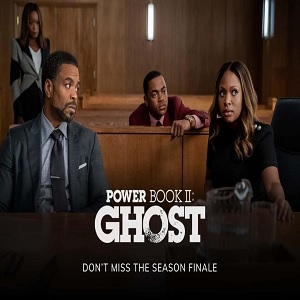 The original “Power” came to an end and the internet was heartbroken to see Ghost (Omari Hardwick) die. Many have jokingly said they knew 2020 would be a hard year, when Ghost died. Jokingly, many have said that Ghost was 2020’s first death.

Tariq (Michael Rainey, Jr.) was the one who killed Ghost, after the series finale ran down scenarios of everyone who could have done it. In the end, it was Ghost’s son. Ghost warned Tariq there was no turning back and when he had to go to school to get the fortune, he knew it.

“Power, Book II: Ghost” launched, this summer, with Tariq now building his own empire, while also trying to keep his grades up. This season has seen Brayden (Gianni Paolo) become his right-hand, as Tariq deals with Monet Tejada (Mary J. Blige), and her family. Last week saw her son, Cane (Woody McClain) try to kill him, and now Tariq owes 2-Bit (Michael J. Ferguson), for saving him, setting up an epic season finale.

Read the “Heart of Darkness” spoilers below:

Tariq and his mom, Tasha (Naturi Naughton), both have their day in court.

Tasha is increasingly concerned that Davis (Method Man) does not have the best intentions, when it comes to Tariq.

Saxe (Shane Johnson) is desperate to achieve “justice” and is willing to do almost anything to accomplish this.

Facing pressure from Monet and Cane, Tariq is desperate to do what he has to do to keep his mom, Tasha, from going to prison.

Tariq finds his back against the wall, with all of this mounting pressure.

Monet is on a mission to put things back together, within the organization, after Rico’s (Jackie Long) assault on her family, which left Dru (Lovell Adams-Gray) shot and in the hospital.

Cane has plans of his own, after Monet banished him from the Tejada family.

Watch the “Heart of Darkness” promo below: