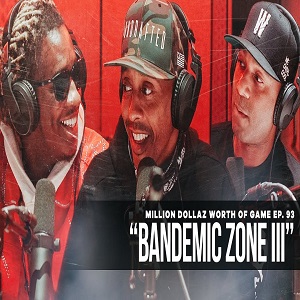 Seven years ago, Young Thug found himself embroiled in controversy that had nothing to do with him. Signed to Gucci Mane, at the time, Gucci was going through a total meltdown, going at everyone. As he prepared for prison, Gucci released Thug from his contract.

Immediately, Young Thug saw success, and 2014 saw him become the biggest breakout artist of the year. Soon, Birdman formed Rich Gang, with Thug and Rich Homie Quan, and “Lifestyle” came from that. While that ended as fast as it started, Young Thug kept making hit records.

Young Thug recently sat down with Gillie Da King and Wallo for the latest episode of the “Million Dollaz Worth of Game” podcast. The conversation touched on nearly everything. For one of the first times, Thug spoke on his unique style of dress and personality, the Lil Wayne situation, Wayne being his idol, Verzuz, and more.