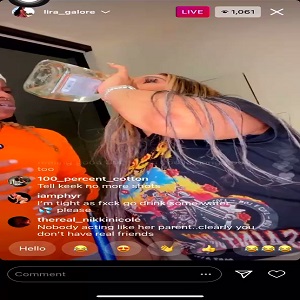 Often, Lira Galore is a topic of discussion, and when she is, she is normally the biggest story. A model, Lira Galore first rose to fame, when she and Rick Ross were involved. That relationship was followed by her name being dropped in rap records, namely by Remy Ma.

Lira Galore had some sextape drama, a few years ago, and then became sister wives with Kaylar Will, as both were pregnant by Pierre “Pee” Thomas, at the same time. Since then, Lira Galore separated herself from that drama. However, people still bring her name up.

Recently, Lira Galore, and her friend, were on IG Live, drinking. After actually getting drunk, on Live, Lira Galore became a trending topic, on Twitter, as people said she needs real friends. Tired of people always talking, Lira took to Twitter, venting about people making a big deal out of her getting drunk on Live.