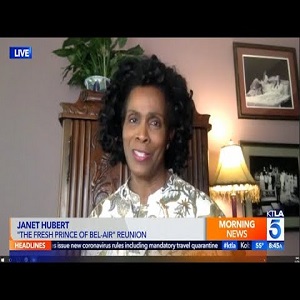 Fans often debate which era of “The Fresh Prince of Bel-Air” was the best. Normally, this debate stems from who was playing ‘Aunt Viv,’ the original, OG, Janet Hubert, or Daphne Maxwell Reid. The second aunt had much less of a role than the original.

However, the show took a turn, as the kids, led by Will Smith, entered into adulthood. Behind the scenes, Janet Hubert left the show, and was labeled a problem by Will Smith. This was confronted, leading into last month’s “Fresh Prince of Bel-Air” reunion special.

Janet Hubert had a very sweet reunion with Will Smith, and the rest of the “Fresh Prince” cast, during the HBO Max reunion. Following this, she spoke to KTLA about this. She expressed how good it feels to have her reputation restored, following reuniting with her former castmates.

Porsha went from thinking the Underground Railroad was an actual railroad to leading protests! Fans on Twitter give Porsha props for going back to her Civil Rights roots #RHOA
Mariah Carey ft. Ariana Grande and Jennifer Hudson – “Oh Santa!” [VIDEO]