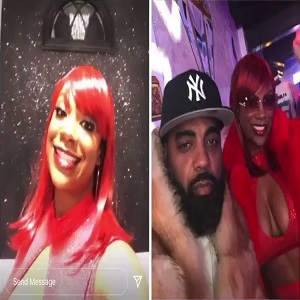 Last night, Kandi Burruss and her husband, Todd Tucker, were present at Reginae Carter’s birthday party. It was a theme party, which Kandi mentioned on social media. Saying she loves a good theme, Kandi made mention of her outfit being a Lil’ Kim tribute.

Lil’ Kim is often a fan favorite among celebrities to dress as, for parties, mainly Halloween. A few years ago, Beyoncé broke the internet, when she dressed up as Lil’ Kim. Three years later, Kandi decided to take on the Lil’ Kim outfit, for Reginae’s party.