Yesterday, Juicy J released his long-awaited ‘The Hustle Continues’ album after building it up since 2015. This project contains 16 tracks with appearances from Wiz Khalifa, A$AP Rocky, Megan Thee Stallion, Ty Dolla $ign, and more. Fans of the Three 6 Mafia legend have since shown him love on his latest release which is his first album since 2017‘s ‘Rubba Band Business.’

Wiz Khalifa was featured on ‘Gah Damn High’ from the album and now, revealed that he’s working on his own album as well. He took to Twitter this evening to also say that he wants Juicy to produce all of this project. Juicy is known for his solid production skills as well and he’s worked with Wiz frequently since they were at Taylor Gang together.

“My next album is for sure gonna be produced entirely by @therealjuicyj. Now i just need help namin it lol.”

As Wiz said on Twitter, the title is still unknown as of now as well as the release date. His last studio album was ‘Rolling Papers 2.’ This debuted at No. 2 on the Billboard 200 chart. 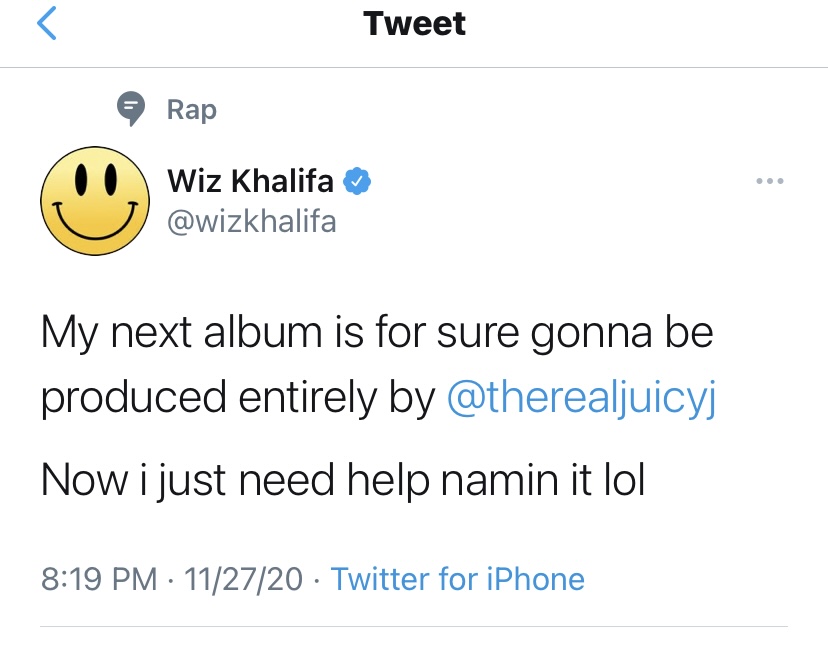 Trey Songz Celebrates 36th Birthday By Joining Only Fans
XXXTentacion, Drake and Bad Bunny Become Only Artists To Each Reach 100 Million Spotify Streams in a Day