Kodak Black has been incarcerated for over a year now due to his federal weapons case where he was found to have falsified information on gun applications and was linked to multiple firearms being found in his home town of Pompano Beach, FL. He has been doing good deeds lately though such as his team delivering turkeys in Pompano.

Now, Kodak is planning for more charitable work. He took to his Twitter feed to say that if Donald Trump or Joe Biden frees him, he will donate $1 million to charity work within the first year he’s out. He also added that “that’s on everything.”

Sadly, Kodak endorsed Trump earlier this month. He oddly believes that Trump’s “platinum plan” will help Black Americans. His tweet read “What do you think of the ‘Platinum Plan?’ [Bradford Cohen] sent it to me and I read it. This is what the community needs…. more ownership. That plan is right! I want to help with justice reform when I am out as well. @realDonaldTrump #justicereform #prisonreform.”

On November 11, Kodak also released his third studio album, ‘Bill Israel.’ It peaked at No. 42 on the Billboard 200 chart. This project also contained 11 tracks with appearances by Gucci Mane, Tory Lanez, and more. Currently, Kodak isn’t scheduled to be released from prison until November 3 2022. 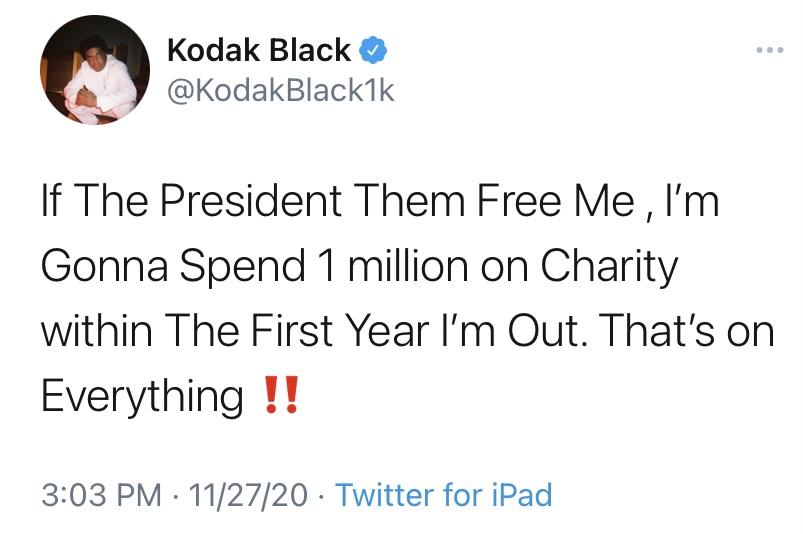 Lil Wayne and DJ Khaled Finally Release ‘No Ceilings 3’ Mixtape as Fans on Twitter Say Wayne Brought The Heat Again
Summer Walker Seems Over It With Boyfriend, London On Da Track, a Week After Announcing Pregnancy and Getting Back With Him Again; Subliminally Calls Him “Lame” and “Selfish”