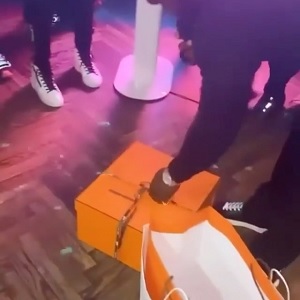 Seventeen years have flown by, as 50 Cent went from a newcomer, the hardest rapper in the game, to being a household name. Just when people were saying 50 fell off, he came back with “Power.” In more recent years, people know him as “Kanan.”

50 Cent would also build a reputation for using Instagram to troll people, initially mainly, Diddy. Last year, 50 used his IG to get money from people who owed him. Clearly, above all else, 50 Cent is a jokester, at heart.

Last night, 50 Cent celebrated with his girlfriend, Cuban Link, for her birthday. With everyone so up in arms over Birkin bags, 50 Cent got one for Cuban Link. Presenting it to her, he said money was no issue, so he got her a fake one from Marshall’s, leading to laughs, before he gave her a real Birkin bag.

Quando Rondo’s Crew Claims Self-Defense in King Von Shooting; Explains How Von Started The Altercation and Rondo Feeling Bad About How It Happened
Woman, @_morganpierce, is allegedly the woman Ken Walker was spotted with, and a man claiming to be her husband is saying they are definitely getting divorced