Last Friday, hip-hop took a horrible loss with the murder of King Von in Atlanta. A shootout reportedly occurred between his and Quando Rondo’s crews outside of Monaco Hookah Lounge in the downtown area. Six people were shot with two dying from their injuries, including Von. One remained in critical condition. One man ended up being charged for murder in this case and this was 22-year-old Timothy Leeks.

Von’s ex-girlfriend, Asian Doll, still has plenty of feelings for him as she’s been putting up tribute posts all weekend.She also claimed to have known his last words which were supposedly “Y’all let them n***as get up on me… stop crying y’all let them get me,” Von’s manager, Jameson Francois of 100k Management, quickly shut that down.

“Let one more person from the outside that’s close to Von keep on with all this goofy shit. I promise I’ma expose all that goofy shit, ’cause I was there n got shot behind this. Y’all stop blaming people y’all don’t even know what happen or who was involved. Y’all see one camera angel and think y’all figured it out. That goes for [ex]-girlfriend, family, or whoever.”

Asian also claimed that she knew that Von went to Heaven. It appears that she is simply having trouble grieving right now and discussing Von in any way helps her cope during this tough time. Francois also said to DJ Akademks that that she supposedly spoke to a spirit reader and that’s where the “last words” claims came in.

Francois clearly wasn’t feeling this as he said “So, you talkin’ to the dead now, Asian Doll? So, Von, in the afterlife, is telling Asian Doll these ‘facts,’ guys,” It’s evident that both he and Asian are still trying to heal. This also comes over a week after Von released his ‘Welcome To O’Block‘ album, which just debuted at No. 13 on the Billboard 200 chart, his highest-charting album to date. 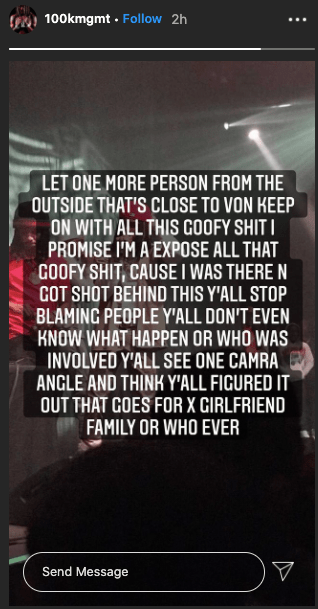 Teyana Taylor – “Concrete” [VIDEO]
T.I. Says People Need To Handle Beefs In Their Own Cities and Not Kill Each Other in Atlanta After Recent Murder of King Von