Over the weekend, former star NFL running back, Larry Johnson, took some shots at Megan Thee Stallion on Twitter and blamed her for allegedly getting shot by Tory Lanez. He said “Ladies, if you date a man who coined the term “Demon Time,” and you get shot by him during Demon Hours, be accountable for YOUR stupidity. #toreylanez”

Lanez allegedly “liked” the post on Instagram as his tweets were reposted by The Shade Room. The Toronto rapper continued to get cancelled by social media after seeing this and due to Megan saying last week on Instagram Live that he was the one who shot her last month. Now, it looks like Lanez did not actually like this IG post at all.

According to HotNewHipHop.com, Lanez’ creative director manages his Instagram feed and said that the like was done by photoshop. They added that he never interacted with the post either. As far as Johnson goes, he has tweeted some very wild things over the last few years which has led many people to believe that he’s suffered from CTE since the end of his NFL career.

Check out the original liked IG post by Lanez about LJ’s tweets below. 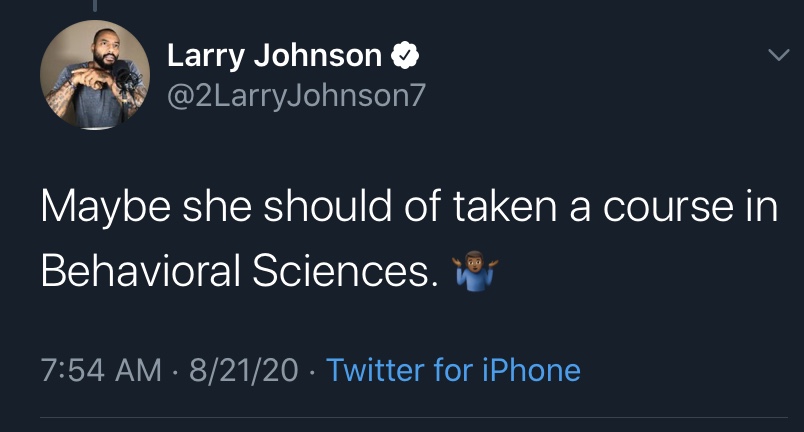 Popular IG model, @yayasworld, posts boo’d up pics with Yo Gotti, from vacation, after previously being involved with Floyd Mayweather, 50 Cent, and Gervonta Davis [PHOTOS]
Mary Holden, a 68-year-old white woman, gets arrested for camping out in front of Kentucky Attorney General, Daniel Cameron’s house, demanding him to complete his investigation into the murder of Breonna Taylor #JusticeForBreonnaTaylor [PHOTOS]