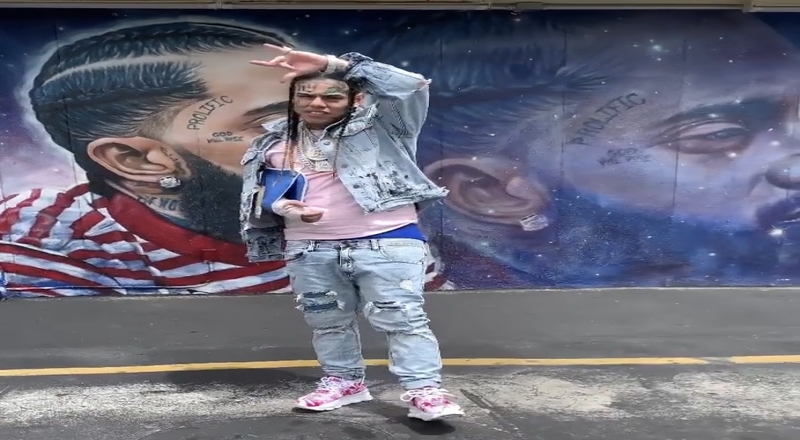 Tekashi 6ix9ine has been in LA to start the weekend as he’s been seen with Akon. The two may have shot the music video for “Locked Up 2.” 6ix9ine is also making noise for visiting a Nipsey Hussle mural in the area. Many think 6ix9ine wanted to disrespect Hussle but according to him, that’s far from the truth.

“REST IN PEACE NIPSEY!” said 6ix9ine on Instagram. I KNOW YOU LOOKING DOWN ON ME IM OUT HERE IN THE HOOD PAYING MY RESPECT 🌈🌈🌈🌈🌈🌈🌈🌈🌈 P.S THE STORE WAS CLOSED BUT THEY PAINTED THIS ON THE SAME BLOCK.”

TMZ also caught up with 6ix9ine in Beverly Hills and he revealed that he just wanted to show Hussle love. The Brooklyn rapper also denied getting robbed in the city, contrary to false reports. He was seen being surrounded by large security guards so it would be a very tough task to get past them. 6ix9ine added he loves Nipsey the way LA loved The Notorious B.I.G. This seemed to be a bad comparison though considering the fact that Biggie got shot and killed in LA.

6ix9ine has been moving out and about since fully becoming a free man earlier this month after getting off of house arrest. It appears that his probation officer approved his trip to LA as well because an initial condition stated that he couldn’t leave New York.

Check out 6ix9ine at the Hussle mural along with him speaking with TMZ below.