Skip to content
You are here
Home > Hip Hop News > Kenya Simmons shares shocking video of police officers shooting a man in the stomach TWICE, even though his hands were up, shooting him in front of his children, in Mesa, Arizona [VIDEO] 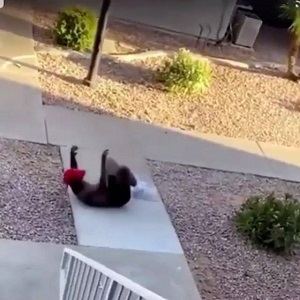 The above image is disturbing and it’s happening far too often. At the end of May, George Floyd was murdered by Minneapolis police officers, with the actual killer standing on his neck. Since then, racial tensions are at lows not seen in decades.

Protesting for George Floyd, and the end of police brutality, began taking place around the nation. Unfortunately, in the middle of that, there was the Rayshard Brooks murder. Thankfully, Lorenzo Jones is still among the living.

Kenya Simmons took to Facebook to share the video of a man, identified by Lorenzo Jones, being shot twice by the Mesa, Arizona SWAT team. The team ordered him to put his hands up, as he was talking to a woman, as five small children surrounded him.

Despite that, and Lorenzo putting his hands up, the police shot him in the stomach, as he laid, in pain, they shot him again, telling him to keep his hands up, but it’s a good thing he was shot with bean bags, as actual bullets would have killed him.