James Harden finally rejoined his Houston Rockets at the NBA bubble in Orlando yesterday. This was after he couldn’t come to Orlando earlier due to personal reasons. People were shocked to see that he was wearing a Blue Lives Matter police mask, though. This symbolizes what many white supremacists say to downplay the fact that black lives do matter.

Many have wondered if Harden knows what his mask meant as this has been very alarming. One who is coming to his defense is Young Thug, who calls Harden his brother. He used the excuse of Harden not being on social media for not knowing what’s right or wrong in regards to social justice.

“Just so u know James harden is my brada… btw he don’t have internet so he obviously don’t know what’s right or wrong if he posted something that’s against US…but I hate when rappers get in niggas biz like it’s can’t happen to em💥 buster let n*ggas clear they shit up activist.”

Hopefully, this was just ignorance by Harden and he addresses this soon. His Rockets are also contenders for an NBA title this year so we will see how they do when the season officially resumes on July 30. Check out Thug’s tweet addressing Harden’s mask below. 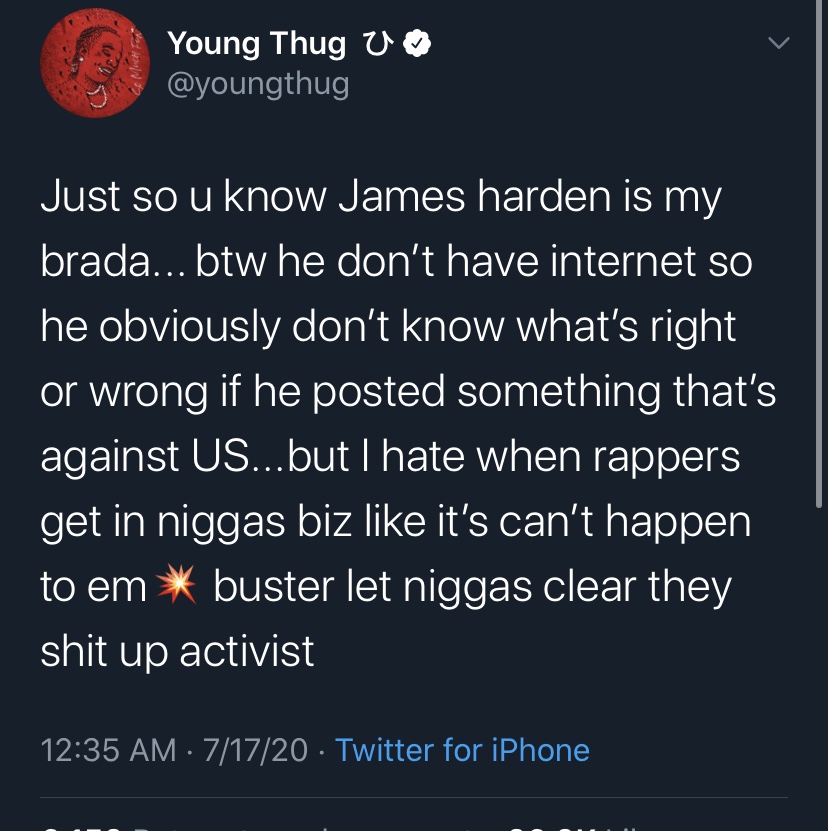 Crystal Hatcher-Edwards shares the story of @standwithJennifer, on Facebook, a woman who purchased a house, only to have racist neighbors throw human feces on her property, bury dead squirrels, spit on, and walk across her property with guns, attempting to torch her home at 3 am, telling her to go back to where she came from, and the police said she must be harmed before an arrest can be made #StandWithJennifer
Juice WRLD’s Posthumous ‘Legends Never Die’ Album Set To Debut at No. 1 With 508,000 Units Sold in First Week; Becomes Biggest Debut of 2020