The 33 year-old Philadelphia Eagles wide receiver may have offended a few today after posting his agreeing with Farrakhan’s most recent speech; And later posting quotes to his story that did not sit well with some of the fans. The NFL star’s Instagram displays his support of the Black Lives Matter movement in several posts as he captions his concern for the injustices African-Americans are facing across the country and educating as well. He has also made several statements by way of posting clothing apparel that shares anti-racist statements, shoes of recent victims Ahmaud Arbery and Breonna Taylor painted on them, and plenty more.

Many from the Jewish community are upset and have taken to Twitter demanding that the organization [the NFL] force an apology from Jackson or have the team do so after his defending Louis Farrakhan. Rumors have even begun to transpire that Ezekiel Elliott will be suspended for not “stopping” Jackson from posting anti-Semitic quotes. As the Philadelphians diligently work together to cancel DeSean Jackson — social media chatters as they wonder if we should anticipate a formal apology in the morning or not. 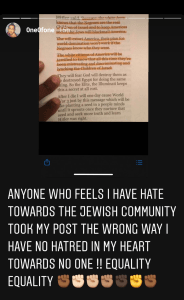 The 3X Pro Bowl player was drafted in 2008’s NFL Draft and since has been considered one of the top 10 wide receivers available as his 24 career touchdowns of 60 or more yards has been the most in NFL history. He returned to the Eagles after being traded last year from former team, Washington Redskins, which are undergoing some changes themselves in light of the anti-racist movement taking place. Their team is strongly reconsidering a name change as some of their investors are pressing for the “Redskins” to no longer be their mascot.

Back to Desean Jackson who is currently training in Tampa, FL with Jalen Hurts, the Philly Eagles new quarterback. Seemingly unbothered, Jackson posted on his IG story that if anyone was under the impression that he was expressing hatred towards the Jewish community, the post was taken the wrong way. He ends the message with several fist emojis stating “EQUALITY.”

Do you think the wide receiver will be issuing an apology in the morning? 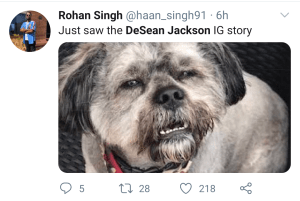 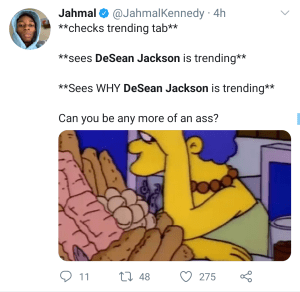 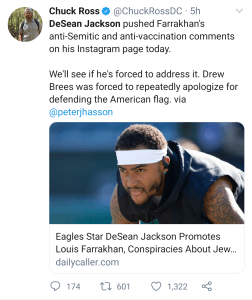 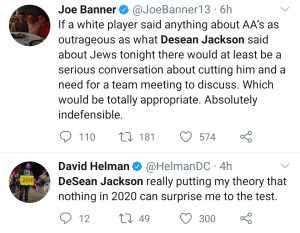