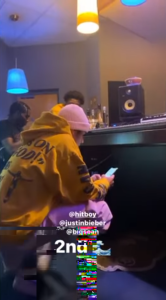 We might be pretty close to having the official anthem for Summer 2020. We just got word that the Billboard chart toppers Travis Scott, Big Sean, and Justin Bieber have been in the studio heavy creating new music for us to make a new Tik Tok dance to.

Monday evening Super Producer and Songwriter Chauncey A. Hollis aka Hit-Boy posted exclusive footage of the artists collaborating on what appeared to be a fire record in the making. The string of boomerangs began with a tag of “Sicko Mode” rapper Travis Scott followed by another post showcasing a very focused Big Sean and Justin Bieber with the caption:            “2nd Wave.”

The track’s official title hasn’t been revealed yet, but fans of all three artists have no doubt that the record will be a banger and top every chart known to man.

This will be the first time all three artists will be on a song together as a trio, but Justin has worked with both Big Sean and Travis Scott individually in the past on previous tracks. Big Sean and Justin Bieber hit #1 with “As Long As You Love Me” and “No Pressure” back in 2015, while Scott and Beiber made magic with “Second Emotion” from Bieber’s Changes album.

Will you be listening when the track drops?