Jermaine Cole aka J.Cole dropped a new track titled “Snow on tha Bluff” Tuesday evening that reflects collective thoughts about the anger and uncertainty felt by the Black community. The “Middle Child” rapper is one of the many rappers seen out in the streets protesting alongside the people in his hometown of Fayetteville, NC; but of course, one can’t please everyone. Last week, a female rapper from Chicago that goes by NoName or NoName Gypsy, took to Twitter as she blasted people’s “favorite” artists for failing to use their platform.

“Poor black folks all over the country are putting their bodies on the line in protest for our collective safety and ya’ll favorite top selling rappers not willing to even put up a tweet… niggas whole discographies be about black plight and they nowhere to be found.”

Fans immediately assumed that she was talking about J.Cole and Kendrick Lamar since both rappers are most widely favored for their progressive and innovative lyrical content, but there’s only one thing wrong with her remarks: Both rappers have been spotted out protesting with the people.

NoName’s shade doesn’t quite hold validation as several other top-tier rappers are seen using their platform in many ways including Chance the Rapper, T.I., Killer Mike, and Snoop Dogg as well.

J.Cole raps behind a very gentle melody in the background of “Snow on tha Bluff”:

My IQ is average,

There’s a young lady out there, she way smarter than me

I scrolled through her timeline, in these wild times

And I started to read,

Mad at these murder police,

She mad at my niggas, she mad at our ignorance,

She wear her heart on her sleeve,

She mad at the celebrities,

Low key I be thinkin’ she talkin’ about me”

The Chicago rapper later tweets “QUEEN TONE!!!!!!!” in response to a line that Cole spits “…it’s something about the queen tone that’s bothering me…”

The conscious lyrical rapper Jermaine Cole goes on to encourage NoName to not criticize the same figures that the world needs, but rather educate them on how to do better. Ari Lennox, a signed artist under Cole’s label Dreamville, thanked NoName on Twitter for “giving af about us constantly and endlessly” soon after the single was released, adding that “I feel and appreciate everything you put out into the world. Almost everything you tweet moves me. I need and I am moved by so much you stand for. Thank you for enlightening us queen. I pray more folks will appreciate and understand!!” The singer references the countless informative and forward thinking tweets that NoName consistently puts out, specifically regarding the protests and implementing strategy and overall black radical unity.

What are you thoughts on the situation?

Here’s some of the things people have tweeted below: 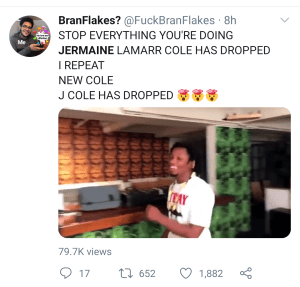 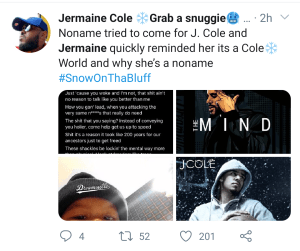 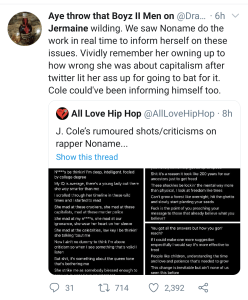 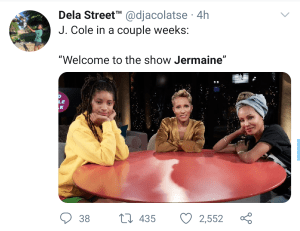 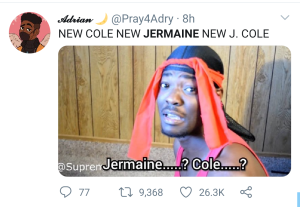 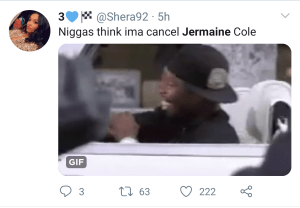