Skip to content
You are here
Home > Hip Hop News > Nick Cannon has another baby on the way with Brittany Bell while his current girlfriend Jessica White posts provocative pics of herself and Nick on the same day ex, Brittany, announced her pregnancy

The recent Howard University grad, black activist, and television host Nick Cannon doesn’t seem to be slowing down with the ladies at all, as the 39 year old is seemingly in a love triangle. The father of three shares a son with 2014’s Miss Universe Guam, Brittany Bell, who recently posted a photo of their adorable three year old in a superhero cape captioned:

The model’s instagram page is filled with glamorous shots of herself and her sweet babyboy. The only photos of Nick on her page are during holidays or birthdays. Obviously involved in his childrens’ lives, Cannon is seen sharing laughs at their son’s 3rd birthday party, along with Thanksgiving dinner and a Disney visit. Meanwhile, his on-again off-again girlfriend Jessica White, shares a sexy black and white photograph of she and Cannon as she grips her exposed breasts and he grips her exposed thigh.

“Always been the love of my life always will be. REAL love can never be broken. You are me and I am you for eternity. @nickcannon you are a king always remember that sh**”

The 35-year-old Victoria Secret runway model captions underneath the photo. The pair have been said to have a ton of history together, as they allegedly began dating in 2015 but kept their relationship on the low until his divorce with legendary singer and songwriter Mariah Carey was finalized. The Sports Illustrated beauty has confessed to also dating Terrell Owens, Sean Penn, Trey Songz and John Legend in the past.

Although the Wild’N Out creator and media personality has been very vocal about having no desire to ever tie the knot again, he is certainly the loverboy as he has both of these women are seemingly in very happy spaces with him.

What are your thoughts on the love triangle? 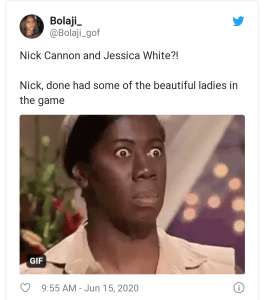 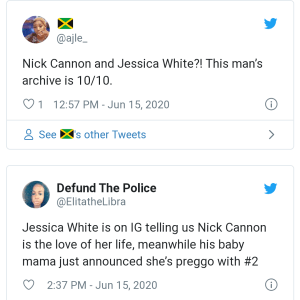 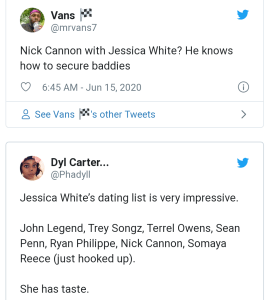