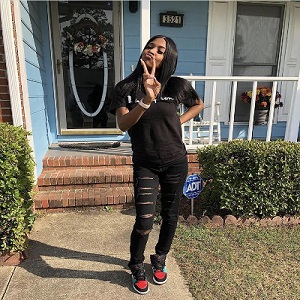 Yesterday, a shocking Instagram Live video went viral, being shared on both Facebook and Twitter. The video showed a young mother, driving, while repeatedly punching her infant child. Still available on the internet, that video is incredibly hard to watch.

There were so many questions, all rounded out with people saying that woman didn’t deserve to be a mother. Samira Harris-Saunders is the woman in question. Last night, people began sharing her Facebook profile, which has since disappeared.

Samira Harris-Saunders is reportedly now in police custody and the father has the child. Allegedly, her reasoning for beating the child was because the father no longer wanted to be with her. Despite her profile disappearing, Facebook is still dragging her, as is Twitter and Instagram, for abusing her baby.

Read the comments about Samira Harris-Saunders below:

DaBaby Gets First No. 1 Single on Billboard Hot 100 Chart With “Rockstar” Feat. Roddy Ricch
1501 Certified Entertainment CEO and Former MLB All-Star, Carl Crawford, Faces 10 Years in Prison For Choking Ex-Girlfriend at Gunpoint After She Moved On From Him By Talking To Someone Else