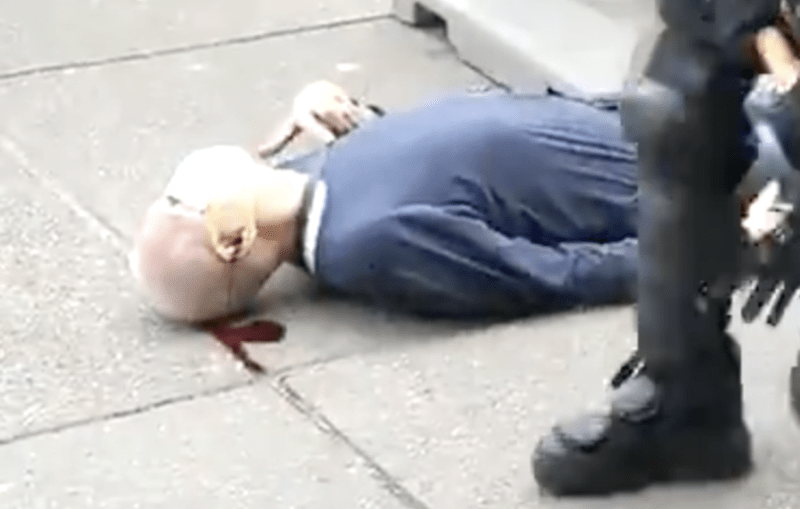 As all eyes are on the police force across the country, the unfortunate reality is that they continue to show us more and more unacceptable behavior towards civilians of America. Caught on camera or not, the fraternal order of police deliberately abuse their power as they have viciously been assaulting young and old protesters all week.

Another disgusting video has gone viral as Buffalo Police Officers assaulted an elderly gentleman in broad daylight as he stood alone before them seemingly returning a helme that he had found. We all watched in horror as two of the officers shoved the 75-year old man to the ground and beckoned the others to continue walking past him, as he was left lying motionless on his back, bleeding out from his head. They later lied and stated that the gentleman “tripped and fell.”

The Mayor released a statement:

“….The victim is in stable but serious condition at ECMC. I was deeply disturbed by the video, as was Buffalo Police Commissioner Byron Lockwood. He directed an immediate investigation into the matter, and the two officers have been suspended without pay.”

Mayor Brown goes on to say:

“After days of peaceful protests and several meetings between myself, Police leadership, and members of the community, tonight’s event is disheartening. I hope to continue to build progress we have achieved as we work together to address racial injustice and inequity in the City of Buffalo. My thoughts are with the victim tonight.”

The man is a longtime activist, known to many in the Buffalo community. For his privacy, they did not release his name of other identifying information. 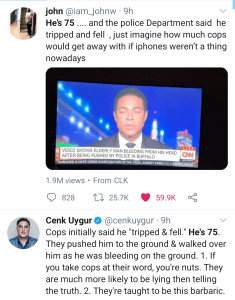