Say what they may about Kanye West, one thing that is undeniable is his accredited genius… so much genius, in fact, that he may have just pulled the biggest stunt of the year.

The Hip Hop community was gravely disappointed a couple of years ago as the highest-paid person in hip hop [according to Forbes], met with Donald Trump at the White House in full support of the “Make America Great Again” campaign. Surrounded by press and paparazzi, West posed with the elected President as the Hip Hop community watched in horror. Was this the same Kanye West that boldly spoke out for the culture in 2005 on national television stating “George Bush doesn’t care about black people?”

No stranger to backlash, the 42 year-old super producer stood by his decision in spite of what the world thought. Fast forward to this week, Kanye West has been spotted on the ground with the people of Chicago to protest and reportedly donated $2 million to the cause and also set up a college savings fund to cover the late George Floyd’s 6 year old daughter Gianna’s tuition. West also has been said to have donated funds to cover legal costs for the Arbery and Taylor families; as well as to several black owned businesses of Chicago and nationwide that have been impacted by the country’s current crisis.

Chicago rapper GLC, signed to Kanye’s label G.O.O.D. music, recently went on Van Lathan’s Red Pill Podcast and spilled the tea that West has gotten rid of all of his MAGA hats and was reportedly just wearing them to get innocent people out of jail. He claims that the G.O.O.D. music label owner gave him the box [of hats] and said “I’m never wearing these again.”

“I’m just telling you that we got that amazing woman out of jail in Florida, right? We didn’t get to have that meeting until I put the hat on.”

Talk about a plot twist.

One Twitter fan decided to further investigate West’s involvement in the Trump election to prove the legitimacy of the claims only to discover that the Yeezy designer did not donate a dime to the Trump administration, but actually donated to Hillary Clinton’s campaign. The Twitter fan screenshot receipts of his discovery. While some people are skeptical as others are just grateful to seemingly have the “old Ye” back, the contributions that he has made are without a doubt a large gesture in supporting the Black Lives Matter movement across the board. 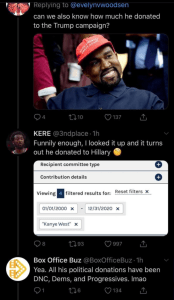