Yesterday, Future announced that his eighth studio album, ‘High Off Life,’ would be out this Friday. It will contain 21 tracks as it’s led by the 4x platinum single “Life Is Good” featuring Drake, “Tycoon” and “100 Shooters” feat. Doe Boy and Meek Mill. Other features on this project will include DaBaby and Lil Baby on the Life Is Good remix, Young Thug, NBA Youngboy, Travis Scott, Lil Uzi Vert, and more.

Future has been dealing with women problems as well as a DNA test proved that he had a son with Instagram model, Eliza Reign. This is now his seventh baby mama. He has subliminally taking shots at her and now, his girlfriend, Lori Harvey, may be the next one right now.

This evening, the Free Bandz rapper took to Twitter to say his famous “She belongs to the streets” line. This immediately led to users believing that he’s finished with Harvey. He also said “Let the streets cover her tab” and “Maann dat bih FRIED.”

Before the Rona hit the entire world, Future & Harvey went everywhere together, including Lagos, Abu Dhabi, and also Jamaica for her birthday which included Normani, Jordyn Woods, and Ryan Destiny. There were also pregnancy rumors after a photo of an ultrasound was posted but it just turned out to be Harvey’s sister. It’ll be interesting to see if Future or Harvey address if he was actually speaking about her on Twitter. 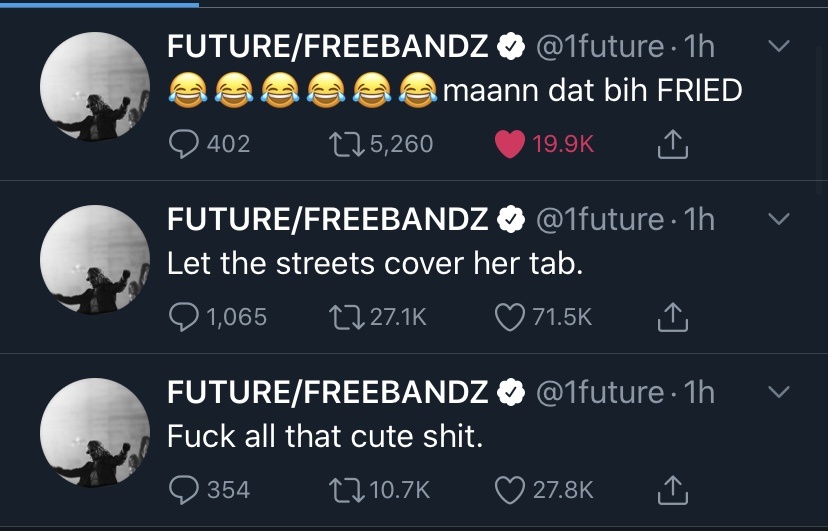 La’Tecia Thomas has unfollowed Lil Wayne, on Instagram, along with all of his fan pages, no longer wearing the ring he gave her, after Kimberly Rose IG posts [PHOTOS]
Future Apparently Subliminally Took Shots at Tekashi 6ix9ine’s Baby Mama, Sara Molina, on Twitter After She Appeared in New Lil Tjay Music Video That Also Featured Rich The Kid; Said She Belongs To The Streets