Tekashi 6ix9ine drew high anticipation on Friday as he went on Instagram Live for the first time since his release from prison last month. He was able to get on house arrest due to coronavirus concerns and is now serving the remaining of his sentence at home for four more months.

Meek Mill wasn’t feeling the fact that 6ix9ine is out or his new “GOOBA single” at all though which has over 80 million views for the music video on YouTube. He labeled the song as “trash” and “BS.” He added that 6ix9ine is an informant behind a keyboard who’s trying to troll families that he ruined. Meek even called 6ix9ine a rat for snitching and said that he hoped he was going on IG Live to apologize to the people he told on or “the victim.”

6ix9ine’s Live session went on to break the app’s viewer record at 1.5 million. He went on to finish at 2 million. 6ix9ine initially snitched on the Nine Trey Bloods in September in court. He was affiliated with them and was investigated for racketeering, weapons,and murder conspiracy. He was hit with two years in prison back in December but got credit for time served.

6ix9ine ended up responding to Meek by saying “Imagine having a new born baby come into the world & be pressed about a Mexican with rainbow hair.”  Meek appeared to stop by saying that he “I’m sorry I lash out sometimes when I see people playing like that lol.” He’s back on Twitter right now though as he has even more time for the Brooklyn rapper.

“The internet got a witness in witness protection living in a town house that can’t even come outside saying check on me. I’m helping free people you putting family members behind bars… I gotta crush you for the culture you chump! How you sleep at night lol.”

The witness protection that Meek is referring to is the feds helping 6ix9ine. This weekend, 6ix9ine got a bit of a scare as a girl recorded him on his balcony and his address got leaked as well. TMZ reported that he had to be relocated to another home due to security concerns. It’ll be interesting to see if/when 6ix9ine responds. Check out Meek alling 6ix9ine out again along with the GOOBA music video below. 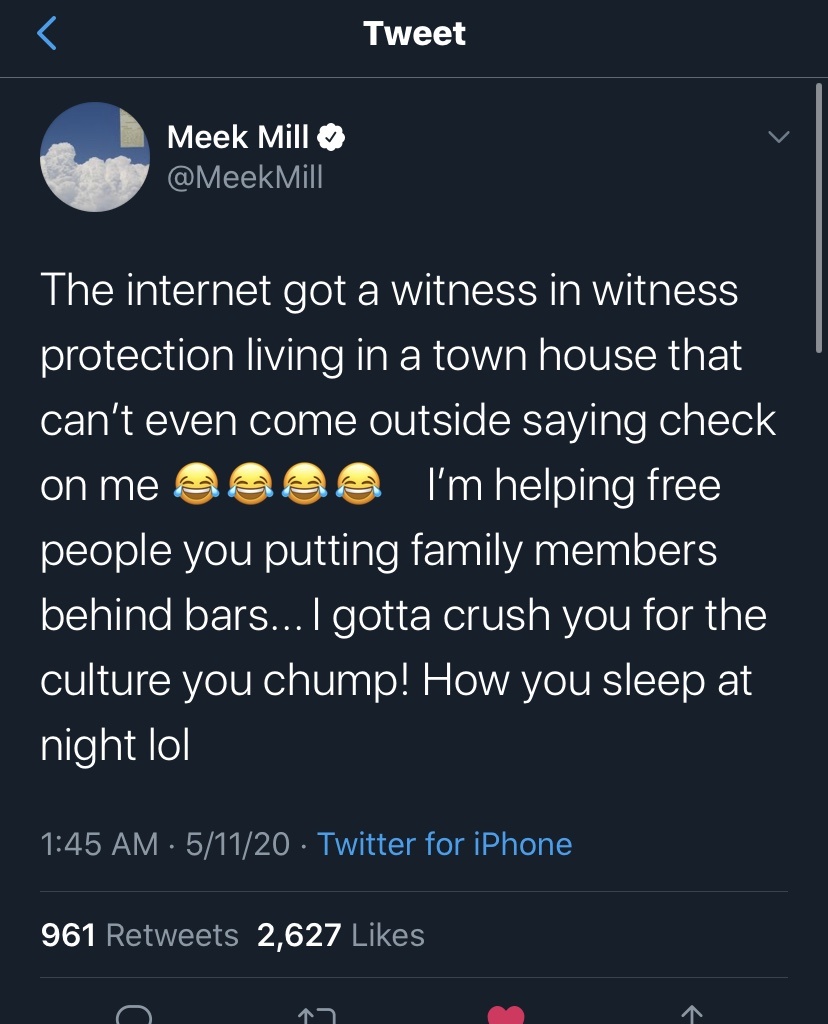 Porsha had the line of the night, dissing Eva, telling her that her breasts were social distancing from each other during the #RHOAReunion
Jay Williams reacts to MJ laughing off Gary Payton’s comments in ‘The Last Dance’ | Get Up [VIDEO]