Skip to content
You are here
Home > Hip Hop News > Tekashi 6ix9ine Breaks Instagram Live Viewer Record at 1.5 Million, Finished With 2 Million As He Defended Being a Snitch in Court [VIDEO] 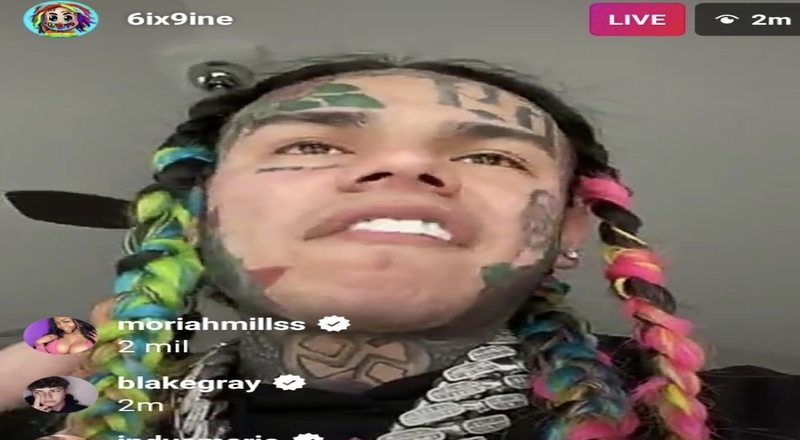 Tekashi 6ix9ine finally went live on Instagram around 3:30pm ET and at the same time, he released his new “GOOBA” single along with the music video for it. On his Live session, he went on a rant on how he’s a legend at 24 for being a snitch and still being in his position now. He also confirmed that he was actually beat down and robbed by the Nine Trey Bloods in Brooklyn in the summer of 2018. He went on to snitch on them in September of 2019 in court for that incident and the crimes they committed in general. 6ix9ine was allegedly involved in obtaining weapons and a murder case with the gang.

6ix9ine also broke the IG Live viewer record during this session at 1.5 million. He finished right at 2 million. He faced criticism prior to going live, specifically from Meek Mill, as he calls him an informant who’s trying to troll families he’s ruined. He added that the new GOOBA song is trash and BS.

6ix9ine went on to add that people never really had a reason to hate on him and now, snitching is their go-to. He emphasized that he can’t be loyal to people who aren’t loyal to him (Nine Trey Bloods,) especially ones who are trying to sleep with his baby mama and trying to kidnap him. Before he closed the live out, he shouted out his fans along with his lawyer, Lance Lazzaro as well. The GOOBA music video has since reached over 472,000 views so far.

6ix9ine was released early from prison in April due to concerns of the coronavirus pandemic and his previous health issues. He is currently on house arrest until August where he will be a free man then. He got hit with two years in prison for his racketeering case and crimes committed with the Nine Trey Bloods but he got credit for time served. In October, he also got a $10 million record deal from 10k Projects as he is set to release an album in English and Spanish.

Check out some of Tekashi 6ix9ine’s rant on IG Live below.

Tekashi 6ix9ine gets on IG and explains why he snitched, 2 million viewers pic.twitter.com/QbgCjPEHAe