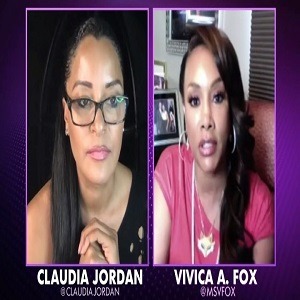 In 2015, Claudia Jordan had a “blink and you miss it” season on “The Real Housewives of Atlanta.” Almost instantly, she and NeNe Leakes clashed, while she and Kenya Moore were besties. That feud actually accelerated Kenya and NeNe’s feud.

Claudia Jordan left, after her lone season, returning to being a media personality. Due to her season, anytime she speaks on #RHOA, people bring up her and NeNe’s feud. But, Vivica A. Fox has never been on the show, but has a feud with Kenya, while on Claudia’s show.

Vivica A. Fox is a regular contributor on Jordan’s “One on One with Claudia Jordan. The topic was NeNe Leakes and Fox indirectly asked if she is using drugs, and perhaps that is why she’s going to rehab. She touched her nose and then Claudia interjected that it looked sweaty.

Continue Reading
You may also like...
Related Topics:bravo, claudia jordan, fox soul, kenya moore, nene leakes, one on one with claudia jordan, the real housewives of atlanta, vivica a. fox