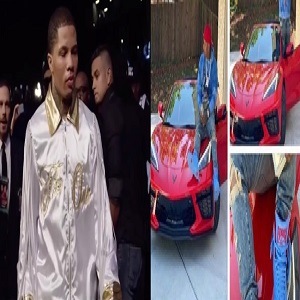 Quickly, misunderstandings can turn into something much more. Right now, Gervonta Davis and Moneybagg Yo are beefing on Twitter over a coincidence. A random Gervonta tweet saw him call the Corvette “middle class,” and then ‘Bagg posted one, minutes later.

However, meddling fans have made it seem as though Gervonta Davis tweeted after Moneybagg Yo showed off his car. This, given the fact that these guys have a girlfriend in common, has led to a back-and-forth. Fans are awaiting Ari to insert herself into the conversation.

Gervonta Davis, after tweeting, was accused of subbing Moneybagg Yo, who had some subs of his own. This led to him telling Gervonta to pull up, to which Gervonta invited Moneybagg to do. Meanwhile, the fans are enjoying every bit of this.

Read the tweets from the fans, along with Gervonta Davis and Moneybagg Yo below:

Continue Reading
You may also like...
Related Topics:ari, gervonta davis, moneybagg yo