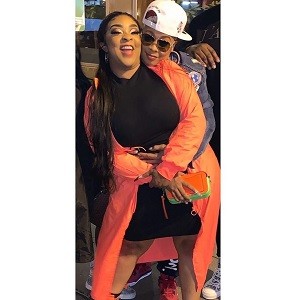 While DaRealBBJudy has been open about her sexuality, for some time, Da Brat has not. However, gossip blogs have been saying, for well over a year, that Da Brat and DaRealBBJudy are dating. For months, there was no proof of this, however.

Since last summer, DaRealBBJudy and Da Brat have been about as subtle as a sledgehammer, though. Last month, they even put fans through an entire fake engagement. Then, there was Judy getting Da Brat’s name on her nails, basically confirming things, then.

Now, Judy is celebrating Da Brat’s birthday early, sharing a video of her gifting her girlfriend with a Bentley truck. Showing off her Bentley coupe, she calls it “Hers & Hers.” With this, she said they never hid their relationship, and now the world knows, officially outing Da Brat, as well.

Continue Reading
You may also like...
Related Topics:da brat, Darealbbjudy

Big Sean Announces Upcoming Album Which is The Sequel To 2012‘s ‘Detroit’ [VIDEO]
Fat Joe calls out WWE Rovert, on Twitter, quoting his tweet, for calling him a cornball, but fans are trying to figure out where Joe was called a cornball, as the tweet was from 2018, about Saudi Arabia