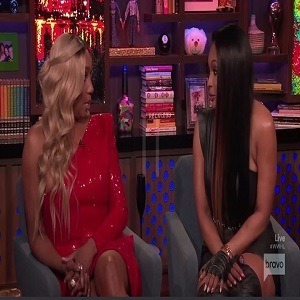 To begin 2020, Wendy Williams spilled some tea on NeNe Leakes, which originated in a private conversation. Once this happened, NeNe took to Twitter, where she spoke on real friends. Then, the speculating began about whether or no NeNe and Wendy were friends.

With all of the drama surrounding “The Real Housewives of Atlanta,” the NeNe focus has been on the show. Tonight’s episode saw NeNe and Marlo trying to be cordial to Kenya. But, Kenya had more than enough drama going on.

After the show, NeNe Leakes and Marlo Hampton sat down with Andy Cohen for “Watch What Happens Live.” They talked about some of everything and, of course, took questions from fans. One asked if she and Wendy Williams were on good terms and NeNe said they were, adding they, along with Marlo, went shopping today.

Marc gets dragged on Twitter for his continued horrid treatment of Kenya Moore #RHOA
Tanya is winning Twitter, as fans are here for her positive attitude, and her man loving her; #RHOA fans think Kenya hates her, and it’s because her man actually likes her, accusing Ken of wanting to be a wife at all costs