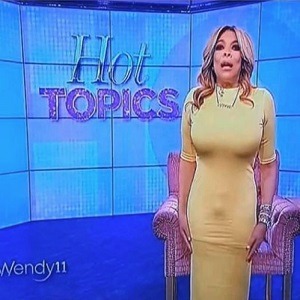 Controversy seems to follow Wendy Williams, wherever she goes. A lot of that is due to her gossip girl persona, but this week has been especially rough. Because she spilled tea on NeNe Leakes, the reality star said she was no real friend, and then she farted live on TV.

Wendy Williams is still dealing with the fart jokes, and now she has to contend with more controversy. There are a large segment of fans who simply don’t like Wendy. Again, that comes with the territory, but many say that she is a man, going as far as calling her Wendell.

Unfortunately, on today’s episode of her show, Wendy Williams had on a tight dress that exposed too much. Her crotch area is definitely visible, and what she has going on looks like more than camel toe. The bulge going on, there, is leading to more jokes about her, for the obvious reasons.

Fetus Deletus: Woman shares texts from a man who got her pregnant, but wanted her to have an abortion, telling her “Fetus Deletus,” with Twitter going in
New Balance? Kawhi Leonard gets roasted by Twitter, after being spotted wearing New Balance hoodie in the strip club