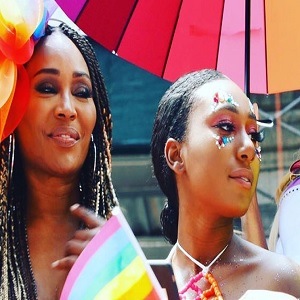 The season twelve premiere of “The Real Housewives of Atlanta” dealt with the topic of sexuality. Just the year before, Cynthia Bailey went through the pain of sending her daughter, Noelle, off to college. A year later, Noelle came with some news about her first year.

Spending that year away from her parents, Noelle discovered her sexuality. She admitted to meeting a female and developing some romantic and sexual feelings for her. Acknowledging her own history with sexuality, Cynthia embraced her daughter, saying she loves her.

Cynthia has since openly discussed Noelle’s sexuality. While everybody loves that she accepted her daughter, they are growing a little annoyed with her mentioning it, every five minutes. On the pride float, Cynthia brought it up, so Twitter kept it real with her, telling her Noelle is bi, and just experimenting in college, adding that when she has an actual girlfriend, then it’s something to really talk about.

Read the tweets about Cynthia and Noelle below: