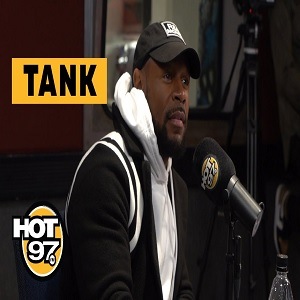 Last week, Tank found himself embroiled in a lot of controversy. Of course, Angela Yee would somehow be involved. Herself, Angela Yee found herself caught in the Gucci Mane drama, from an interview she did with him, back in 2009.

A decade later, Tank came on her show, and the topic of sexuality was brought up. This was a very long interview and most people probably didn’t watch it in its entirety. But, there was a clip of him talking about men performing oral sex on men and it not being gay.

Tank found himself being clowned all over Twitter for his comments. He is doing his media rounds for his new album and he showed up at Hot 97 to speak with Ebro, Rosenberg, and Laura Stylez. During the interview, he spoke on the new album, but also cleared up his comments.

Dwight Howard Dominates The Paint vs Hornets With 16 Pts, 10 Reb, 4 Blk, 8-8 FGM | October 27, 2019 [VIDEO]
LeBron James is being roasted over his hairline, on Twitter, as clip of Anthony Davis telling LeBron to fix his hairline goes viral + Twitter clowns the headband putting pressure on the hairline [VIDEO]