Skip to content
You are here
Home > Hip Hop News > Jeezy Launches His Own Sports Agency, “Sports 99” Which Will Represent NFL and NBA Players

Hip-Hop and sports have always had close relationships to each other over the decades as we’ve seen plenty of rappers hang out with the most dominant athletes in their respective sports. Since 2013, we’ve seen Jay Z take that to the next level with his Roc Nation Sports agency representing athletes such as New York Giants Running Back Saquon Barkley and Brooklyn Nets star Kevin Durant, and future hall of fame boxer Andre Ward.

Jeezy wants in on representing athletes as well as he is officially launching his sports agency, Sports 99, according to sources close to Yahoo Sports. Among the athletes that will be receiving services are NBA and NFL players. The Snowman has always been a big sports fan as he always represents Atlanta sports teams so it’s dope to see him actually be involved in the sports now as well.

It would be no surprise to see Jeezy venture off into signing athletes such as MLB players and boxers as well. Jeezy is well respected as a business man outside of music so signing with Sports 99 would definitely be a solid move on the athletes’ part. As far as music, goes, Jeezy recently released his ninth studio album, “TM104: The Legend of the Snowman.” This is his last project on Def Jam as well. As far as TM104 being his last album, that’s not official yet. 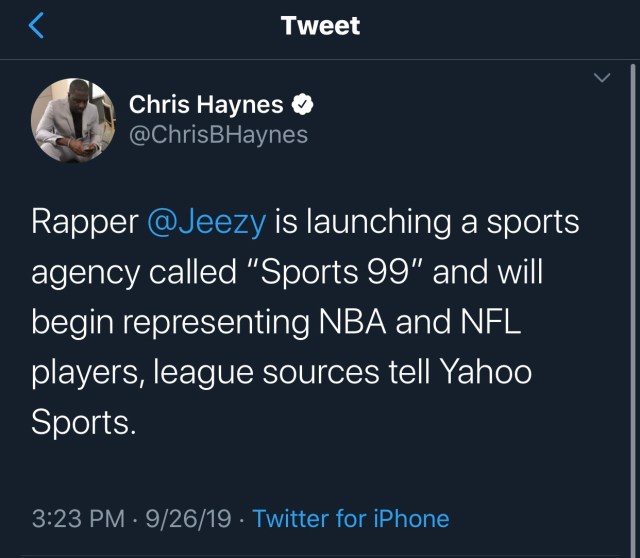