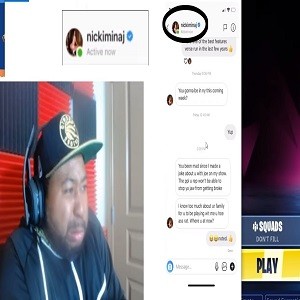 Since “Everyday Struggle” began, DJ Akademiks has transitioned from being an online personality to a TV personality. The series began in 2017, when Cardi B was taking over the game. Through the whole year, the world was pitting her against Nicki Minaj.

With DJ Akademiks and Joe Budden having a discussion panel show, the talk was about Cardi and Nicki. Since Cardi B was on the verge of topping Billboard, and Nicki had no music out, the conversation was slanted to Cardi. When the beef happened, Nicki was mad at them.

Nicki Minaj has repeatedly taken shots at DJ Akademiks and Joe Budden, more so Akademiks. The people on Twitter have noticed how hard she’s gone on Ak. Fighting back, DJ Akademiks shared DMs that were sent to him from Nicki’s IG, where she threatened him and his family, which he discussed in his live video.