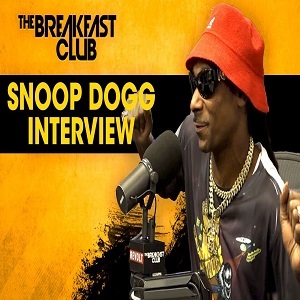 Recently, Snoop Dogg returned to the spotlight, releasing his new album, I Wanna Thank Me. This is his seventeenth album and it goes without saying that most don’t make it that far. But, Snoop Dogg is the exception to the rule.

Snoop Dogg managed to defy every trend and defeat every odd. He has done it in music, television, and film. The evolution of Snoop Dogg from one of the biggest threats to the most-recognizable hip hop figure is extraordinary, to say the least.

Bringing his own brand of cool to “The Breakfast Club,” Snoop Dogg spoke with DJ Envy, Angela Yee, and Charlamagne Tha God. Because of his deep history, the conversation began with Death Row stories, before venturing into other topics. Currently, Jay-Z is dominating discussion, with his NFL deal, and he also talked about Nipsey Hussle, and much more.

#RIPReese: People on Twitter mourn the loss of Reese, a man who committed suicide, after being taunted, to no end, for dating a transgender woman; People give Reese their support
Lil GotIt ft. Lil Keed – “Pop My Sh*t” [VIDEO]