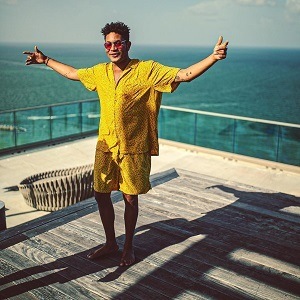 These past two years have seen a lot of artists come and go, some rising from obscurity to the top, and back to obscurity. While those people have come and gone, Bryce Vine has consistently worked. He currently has a lot of momentum with his music.

Bryce Vine teamed up with YG for his “La La Land” single, which he has worked for some time. The song, itself, and the music video have both been met with a warm reception. This song ended up being the introduction of Carnival, his debut album.

Recently, Bryce Vine took the time out to speak to HIP-HOPVIBE.COM for a highly entertaining interview. Discussing his rise in music, Bryce did also open up on some of his insecurities. Also, the conversation took an unexpected dive into the world of soap operas, stemming from a one-off question about Bryce’s mother!

How has the experience been with you and YG working together on “La La Land?” Yeah man, it was dope. It’s funny, when I wrote that song, me and my buddy JP wrote that, using my guitar. Then, we put production on it, and it was really a jam. Then, we thought, “damn, it’d be dope if we got a West Coast rapper on it.” YG was the first rapper that came to mind, but we weren’t sure we’d get him. Long story short, we were able to get him. He didn’t know much about me, but he did his research, and laid his verse. Then, a chance meeting in LA, on New Year’s, led to us getting together to shoot the video.

Being an artist, it’s all about the work and the music, but how does it feel to have a song actually chart on Billboard? I don’t know what most artists say, but I do know some artists check the radio every day. Then, there’s guys like me that just keep going. I remember watching a Lil Wayne documentary and he was informed that his album sold a million copies, and he said “I’m recording,” like “get away from me,” that’s our mentality. Don’t get me wrong, it’s a great feeling, but I am always more focused on just creating my music, and getting the vibe right.

Recently, you performed on “The Wendy Williams Show,” were you at all nervous about performing in front of the daytime TV audience? Oh hell yeah! It’s still the scariest thing I have to do and it stresses me out. I had to learn how to perform for many, many, years. That’s all good, put me in front of a crowd, and I’m in my element. But, put me in front of a camera, I get too nervous, and I think about my movement. With the camera there, it’s different than a regular show. All you want to do is not become that week’s meme, when the camera’s running. I did VMAs last year, which was also terrifying, Seth Meyers, which was alright, and then Kimmel, which was before Wendy Williams. I am glad it worked out, but I’m not comfortable with the camera on me, when I’m performing.

Do you feel as though the stage has been set for Carnival? Yeah, it’s on the way. I feel like it’s the right time. I waited my whole life to put out my debut album, being thirteen years old, working on my music, drawing my first album cover, and putting the parental advisory sticker on it. Now, it’s only days away, it’s time. I believe the music will reach a lot of people. I think I can relate to a lot of people and I feel like people also relate to me

Going back to daytime TV, your mom had a role on Passions; Can you tell our audience more about that? My mom (Tracey Ross) is currently hiking, so I can’t call her, but she will flip out when I tell her that! It was definitely a different environment to grow up in. I learned the behind the scenes stuff early on. Camera angles and all, but I knew that early that I didn’t want to be an actor. I appreciated that my mom stuck through her roots through it all. She was from Inglewood, NJ, and the Frank Lucas era, my grandfather would drive her around Harlem and New Jersey. She grew up poor and built her stuff up, all on her own, and she was always a parent first, bringing me to the set if she had to. Her dressing room would be set up for me, my toys would be there. That’s when I learned that you can do both. My mom played Dr. Eve Russell. I got to grow up around the likes of Ben Masters, who played Julian, and many other TV vets of both the cast and crew.

Where can fans find you on social media? Mostly, I’m on Instagram. It’s @BryceVine, I wish I came up with something like @ChampagnePapi, but that’s it.

Comedy Central Stand Up Host Dina Hashem Makes Insensitive Joke About XXXTentacion’s Murder By Comparing It To A Venmo Commercial [VIDEO]
G-Eazy Speaks Out In Support Of A$AP Rocky. Calls out Sweden and Cites White Privilege and Racism in Case Handling