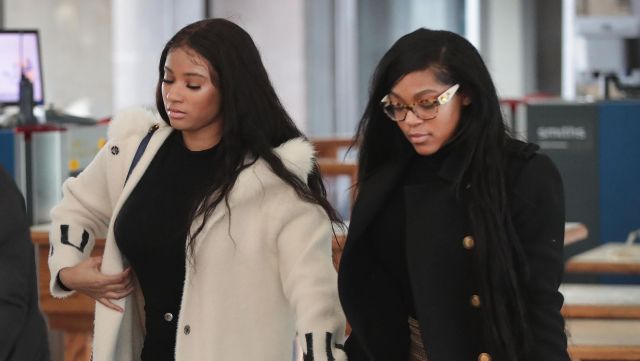 The girlfriends of R. Kelly now have to find somewhere else to live after they were kicked out of the Trump International Hotel & Tower Chicago following the singer’s arrest.

Sources close to Joycelyn Savage and Azriel Clary tell The Blast they were booted out of the Trump International Hotel & Tower Chicago and the residence has been taken over by federal officials.

The “I Believe I Can Fly” singer was walking his dog near Trump Tower when he was arrested, and the doors were promptly locked from the girls, who were forced to find temporary living arrangements.

The family of Joycelyn Savage had traveled to Chicago in hopes of reuniting with their daughter. Joycelyn’s father, Timothy, even confronted Kelly’s publicist during a press conference.

Gerald Griggs, attorney for the Savage family, tells The Blast that Joycelyn’s mother, Jonjelyn, has discovered where her daughter is staying and is currently working on keeping “consistent contact” while trying to arrange a meeting.

We’re told the Savage family is “ready to reunite” with their daughter and let “whatever happened in the past” to be over.

Griggs tells us the family already has counselors and professionals on hand to help Joycelyn transition back into normal life, and help the healing process begin.

I really hope that these girls go back to their families and leave this man alone.

Auntie Jill Scott Urges Women to Stop Doing The #CucumberChallenge: “You putting a cucumber down your throat, benefits you how?” [VIDEO]
Lashana Lynch To Star As New 007 In 25th James Bond Movie