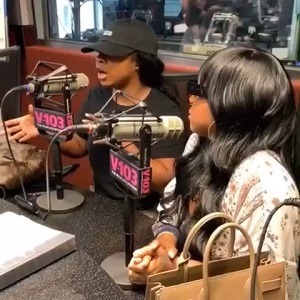 This back and forth between Reginae Carter and YFN Lucci has captivated headlines ever since the two went public. Many were somewhat shocked, given the age difference. But, Reginae grew up in the industry, and Lil Wayne is her father.

When Reginae began dating YFN Lucci, a lot of women on social media said she was in over her head. Sadly, a many were waiting for the couple to fail. Each time they went through something, people were quick to say they were right about the failures.

Reginae Carter hasn’t given up, however, as she and Toya paid a visit to V-103, in Atlanta. When the ladies sat down, they had a lot to talk about. Of course, Reginae was asked about YFN Lucci, and she confirmed they were back together, also referring to him as “my everything.”