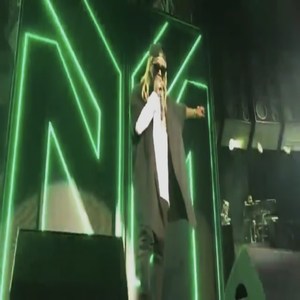 Lil Wayne has been on tour with rock band Blink 182 since June but now it looks like that’s coming to an end. They were in Bristow, VA tonight and Wayne only performed for 20 minutes.

Before performing one last song, Wayne took the microphone to tell fans to forgive him and he’s not used to performing in front of crowds that look like this. The Young Money rapper added that he doesn’t know how much longer he’s gonna do the tour and that tonight might be his last night. He still told the crowd to make noise for Blink 182 though.

Rain soon came which resulted in less fans being in the audience. Not having Wayne for the full hour set probably had them annoyed the most though. Wayne could be back though considering contractual obligations for the tour and possible lawsuits if he quits. Check out Wayne on stage addressing him likely leaving the tour below.

FULL VIDEO of #lilwayne saying this might be his last night on the #blink182 tour. He says "please forgive me I'm not used to performing in front of a crowd that looks like this" He says he doesn't know how much longer he can do this tour.
Gotta understand the man 🤷🏽‍♂️ @TMZ pic.twitter.com/PHwVsQqqS0

Continue Reading
You may also like...
Related Topics:blink 182, lil wayne