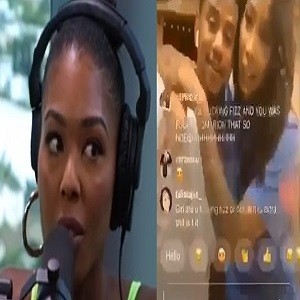 What has Moniece so involved in this Lil Fizz/Apryl Jones drama is just a little puzzling. Yes, the two share a child together, but Moniece has had her fair share of men, and a woman. Only once did Fizz come close to interfering, which was when he and Rich Dollaz met.

Apryl Jones, though, is different from Nikki, who Moniece also disliked, as she is Omarion’s baby mama. Everybody knows Omarion and Fizz are childhood friends, outside of B2K. Still, Fizz and Apryl haven’t confirmed being together, but many say they don’t have to, they show it.

Moniece is the latest to sit down for a Hollywood Unlocked interview, where she speaks on the drama. In her interview clip, Moniece straight up says Fizz is having a baby. Her exact words were “I know you’re having a baby,” adding that’s why she didn’t put hands on “that b*tch,” referring to Apryl.

The Final Betrayal: 50 Cent Releases “Big Rich Town (Remix) As He Gears Up For The Final Season Of “Power”
070 Shake – “Nice To Have” [VIDEO]