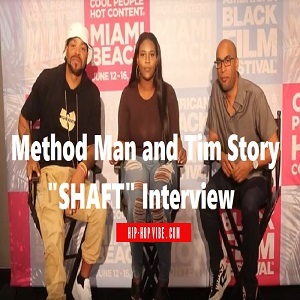 What’s old is new, once again, as Method Man has dominated the 2010s. Most wrote him off as a “90s rapper,” but Method Man has classics, and he’s still relevant. Since 2001, starting with How High, he has focused more on his film endeavors.

Method Man has hosted “Drop The Mic,” since 2017, and the show has increasingly become popular. Along with that, Method Man had a role on “The Breaks,” opposite Mack Wilds. This summer, he had a role in the SHAFT three-quel, and also the Mary J. Blige BET Awards tribute.

At the American Black Film Festival, Method Man and Tim Story spoke with Hip-HopVibe.com about the SHAFT movie. As Tim Story explained his involvement, Method Man mentioned he auditioned for the 1999 sequel, but didn’t get the part. With Tim Story on deck, he got involved, and got the chance to work with Richard Roundtree, Samuel L. Jackson, and Jessie T. Usher, cementing his move into films, although he still does music.

Florida man, Anthony Richardson, gets arrested during routine traffic stop for having a LIVE ALLIGATOR in the passenger’s seat
Apryl Jones leaves fans confused by her #BlackInkCHI appearance, where she flirts with Ryan, adding they haven’t had sex… yet + What about Lil Fizz? [VIDEO]