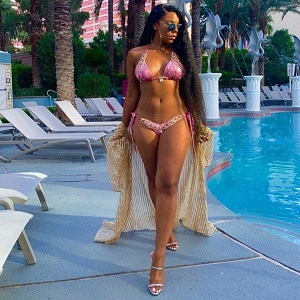 In the early 2000s, Ashanti was the most-popular singer out. Her emergence came in the wake of Aaliyah’s death and she filled some parts of that void. With that came accusations, whether fair or unfair, that she was intentionally imitating the deceased star.

Ashanti proved to not have the durability of Aaliyah, as she was an afterthought four years after her strong debut. Actually, 2008 was the last time she even had a song with radio play. Since then, Ashanti has been known for the Nelly romance, and her sultry IG pics.

Find the photos of Ashanti with Michael Blackson here.

Erica Mena confirms being back with Safaree, tweeting about it almost being his birthday, after he bought her a new car #LHHH #LHHNY [PHOTO]
NIKE Scraps Release Of Betsy Ross Air Max 1’s After Colin Kaepernick Expresses Concerns Of Its Ties To Racism; Some Threaten to Boycott [PHOTOS]